When to Replace a Damaged Land Rover Serpentine Belt

Posted on October 10, 2022 by rowlettmotwpuser The serpentine belt is designed to withstand high temperatures and extreme conditions. You may have heard this belt called a timing chain or a timing belt. They are all similar in their function and their importance to your engine but the serpentine belt is stronger than others. This belt is used to drive the alternator, power steering pump, and air conditioning compressor.

Land Rovers are known for their durability and reliability, and the serpentine belt is an essential part of that reputation. When properly maintained, the Land Rover serpentine belt can last for the life of the vehicle. However, if it breaks, it can render your Land Rover useless, as your vehicle will not run without it.

Indications of a Problem

There are several signs that a Land Rover owner can watch out for that may indicate damage to the serpentine belt. These include:

If you suspect that your Land Rover’s serpentine belt may be damaged, it is important to have it inspected by a qualified technician as soon as possible.

It is important to find mechanics 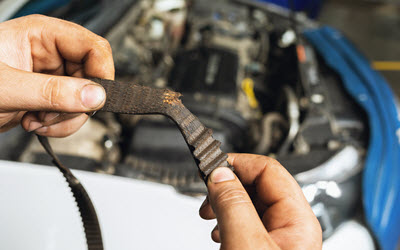 that you can trust to take proper care of your Land Rover and to preserve the performance that you rely on day after day. For drivers throughout our area in Garland, Rockwall, Sachse, Wylie, and Rowlett, TX, the expert mechanics at Rowlett Motorwerks are here for you. Give us a call today or stop in to speak to our friendly mechanics. We are always happy to speak to you about your car, truck, or SUV.