Signs of a Faulty Crankshaft Pulley Bolt in a Jaguar

Posted on February 20, 2022 by rowlettmotwpuser Jaguar, Land Rover, a British multinational automotive manufacturer founded in the United Kingdom in 1922, has been known to produce luxury vehicles that are built to be held to the highest standard. Jaguars may experience crankshaft pulley bolt issues which will result in several symptoms outlined later in this article. The crankshaft pulley is an important part that holds a significant role in a properly functioning Jaguar.

What is a crankshaft pulley?

A crankshaft pulley, commonly referred to by experts as a harmonic balance wheel, is an intricate part of a Jaguar that connects to the crankshaft itself. It is responsible for converting the linear movement of pistons to rotational motion to drive the power steering pump as well as the alternator.

The crankshaft pulley is a part of the delicate engine system where several parts are working together making it difficult to determine exactly what part has gone bad when there is an issue.

The harmonic balancer, or crankshaft pulley, is bolted to the end of the crankshaft to drive the belts allowing the various engine parts to operate such as the alternator and air conditioning compressor among various others. When the crankshaft pulley bolt begins to fail, several warning signs occur alerting the driver to a problem which is outlined below.

The crankshaft pulley is an intricate part of the Jaguar. When it experiences damage or failure of one or more parts that make up the system, your vehicle’s engine, alternator, power steering pump, and even transmission are left susceptible to damage that can result in extremely expensive repairs needed.

Call on the European automobile experts for help! 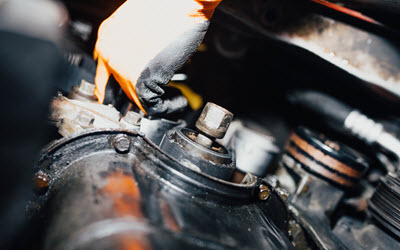 near Rowlett, Wylie, Sachse, Rockwall, and Garland, TX for many years. Our mechanics are highly skilled in the service and repair work of several popular makes including Audi, BMW, Jaguar, Land Rover, Mercedes, Porsche, Volkswagen, Volvo, Domestic, and Asian imports. In focusing on specific brands, we can provide exceptional dealership quality without the high price tag that comes with dealer service.

Rowlett Motorwerks is dedicated to providing each customer with unmatched customer service including a free diagnostic evaluation as well as courtesy shuttle services for those receiving service and repair work on their vehicle. We stand behind the work we provide which is why we are proud to offer customers a 3-year/36,000-mile warranty on all work we provide. With more than 70 years of combined experience in our facility, you are sure to be satisfied with the quality of work provided for your automobile.

If you find yourself having any questions or concerns regarding your vehicle, give us a call or fill out our convenient online form and a member will reach out to you!